Rev. Jackson said that this all came about after family and friends noticed a change in him about three years ago, and he could no longer ignore symptoms of the chronic neurological disorder that causes movement difficulties.

Rarely do we hear about high profile members in the African American community being affected by Parkinson’s.

But make no mistake, Parkinson’s disease is not a white man’s disease.

Anyone can get it. One of the most high-profile African Americans with Parkinson’s is heavyweight boxing champion Muhammad Ali who was diagnosed in 1984 at the age of 42. 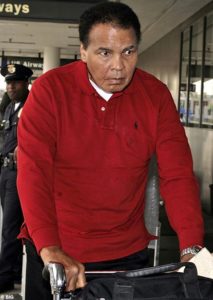 So, what is Parkinson’s Disease?

Parkinson’s disease affects the way you move, and happens when there is a problem with certain nerve cells in the brain.

Parkinson’s Disease is a rare and curious phenomenon, affecting approximately 1 in 300 people; usually s between the ages of 50 and 65. It is slightly more common in men than in women.

Parkinson’s disease is a degenerative disorder of the nervous system that affects predominately dopamine-producing nerve cells in a specific area of the brain. Normally, these nerve cells make an important chemical called dopamine. Dopamine sends signals to the part of your brain that controls movement. It lets your muscles move smoothly and do what you want them to do. When you have Parkinson’s, these nerve cells break down. Then you no longer have enough dopamine, and you have trouble moving the way you want to.

Parkinson’s gets worse over time. But usually this happens slowly, over many years. And there are good treatments that can help you live a full life.

In Parkinson’s disease race matters. African Americans are less likely to be diagnosed with Parkinson’s; are more likely to have delays in diagnosis and; once diagnosed, are undertreated when compared with white patients. This translates to worse outcomes, including higher mortality.

In addition, African Americans with Parkinson’s suffer greater disability and more severe cases of the disease than whites. Why? They often ignore the symptoms.

In a study at the University of Maryland, researchers found that, while blacks may be less likely to develop Parkinson’s, they are more likely to be undiagnosed with the disease. Many of the symptoms may be brushed off as just signs of old age, leading to treatment delays among black patients. There is a critical need for African Americans to pay more attention to symptoms that may be associated with Parkinson’s, such as these 5: 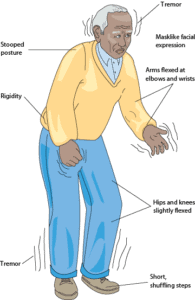 Although a primary cause for Parkinson’s disease is yet to be identified, a number of risk factors are clearly evident.

Advancing age– Although there is the occasional case of the disease being developed as a young adult, it generally manifests itself in the middle to late years of life. The risk continues to increase the older one gets.

Sex- Males are more likely to get Parkinson’s than females. Possible reasons for this may be that males have greater exposure to other risk factors such as toxin exposure or head trauma.

Family history– Having one or more close relatives with the disease increases the likelihood that you will get it, but to a minimal degree. This lends support to the idea that there is a genetic link in developing Parkinson’s.

Agricultural work– Exposure to an environmental toxin such as a pesticide or herbicide puts you at greater risk. Some of these toxins inhibit dopamine production and promote free radical damage. Those involved in farming and are therefore exposed to such toxins have a greater prevalence of Parkinson’s symptoms.

Genetic factors– Studies showed that individuals with a more active gene (alpha-synuclein) had a 1.5 times greater risk of developing Parkinson’s.

Low levels of B vitamin folate– Researchers discovered that mice with a deficiency of this vitamin developed severe Parkinson’s symptoms, while those with normal levels did not.

Head Trauma– Recent research points to a link between damage to the head, neck, or upper cervical spine and Parkinson’s. Some patients remembered a specific incident, others did not. In some cases, Parkinson’s symptoms took decades to appear.

If you develop a tremor, urgent medical care isn’t needed if you have had a tremor-shaking or trembling-for some time. But you should discuss the tremor at your next doctor’s appointment.

If a tremor is affecting your daily activities or if it is a new symptom, see your doctor sooner.

Remember, I’m not a doctor. I just sound like one.

Take good care of yourself and live the best life possible!

How Drugs Work in the BodypreviousBeginner’s Guide to Medical Marijuananext