According to the National Institutes of Health (NIH), more than half of all insured Americans are taking
prescription medicines regularly for chronic health problems. 51 percent of American children and adults
were taking one or more prescription drugs for a chronic condition, up from 50 percent the previous four
years and 47 percent in 2001. Most of the drugs are taken daily, although some are needed less often.
There are more than 8,000 medications available either by prescription or over-the- counter. When drugs
are in the research and testing phase, they are most often given to adult men between the ages of 25 and 50,
but drugs may act and interact very differently in children, teenagers, women, pregnant and nursing
women, menopausal women, and particularly in the elderly, where nutrient absorption and liver function
are issues. Your doctor’s only way of measuring your tolerance to a drug is to begin with a standard dose
for an adult male and see what happens. If you don’t complain of side effects or no effect, chances are the
dose will never be changed.
There are dozens and dozens of factors that can influence what effect a drug has on you, from how
much sleep you got last night and what you had for breakfast, to the condition of your liver and your blood
pressure. For example, alcohol abuse can greatly increase or decrease tolerance to a drug, as can obesity,
exercise, stress levels and exposure to pollutants such as car exhaust, pesticides or industrial chemicals.
Drugs and nutrients can affect each other in your digestive system, in your bloodstream, in your liver and
kidneys, or at the cell level where the drug or nutrient receptor is. 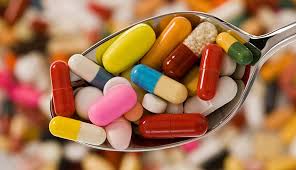 The four major routes for eliminating a drug from the body are the kidneys, liver, skin and lungs. Most
drugs are processed out through the liver and then the kidneys. If you have kidney or liver disease, how
your body handles drugs is greatly affected. Food, drink or lifestyle habits that stress and damage your
kidneys or liver, such as alcohol abuse or chronic exposure to toxins such as solvents and paint fumes, can
also affect how you process drugs. Kidney or liver stress or damage usually raises drug levels higher than
normal by slowing down the excretion process.
Many types of drugs are prepared for clearance out of the body through the liver using enzymes, also
known as the P-450 pathways.

In a drug-free body, or in the presence of only one drug, the P-450 pathways can handle the load. When
you have more than one drug cleared through the same pathway, the system quickly gets overloaded,
stalling the removal of the drugs from the system. The result is an overdose which can be life-threatening.
Grapefruit juice also uses this pathway, which is why drinking it is not advised with some drugs.
How many people do you suppose have been killed in a scenario similar to this one: Paul is taking a
calcium channel blocker for his high blood pressure, is temporarily put on an antibiotic to treat chronic
bronchitis, then has a glass of grapefruit juice and a cup of coffee with breakfast, raising his levels of the
calcium channel blocker so high that his blood pressure drops precipitously, causing heart failure. It’s not
an unlikely scenario. Or let’s say it’s in the evening and he takes some Tagamet (which is available over-
the-counter) for heartburn and a Valium to help him sleep.

If you’re over 50, chances are you’re taking more medications and in greater quantities than you ever
did in previous decades. Indeed, people between the ages of 55 and 64 are given an average of eight
different prescription medications during the course of a year. And those over age 70 take an average of 6.5
medications per day. It’s only logical that the more medications you take concurrently, the more likely it is
that an adverse drug reaction could occur. And for older people, such risks are further compounded by
physiological changes that make the body more sensitive to the effects of medications. The body removes
drugs with other waste materials. Many drugs travel from the cells through the bloodstream to the kidneys
and are eliminated in the urine. The body also removes drugs in tears, sweet and solid wastes. Some of the
anesthetics are eliminated when in exhaled breath.
A sluggish digestive system can slow the rate that medications are absorbed into the bloodstream,
meaning that less of the medications is available to produce the desired therapeutic effect. Diminished
blood flow to the brain may boost the likelihood that certain medications will cause dizziness, fainting, loss
of coordination, forgetfulness, confusion, or other signs of cognitive impairment. In some people the heart
functions less efficiently with age, which in turn may deprive other organs of an adequate blood supply,
causing further disruptions in how medications are distributed in the body.
Anything you put in your body shouldn’t be taken lightly; there are side effects to everything you do
when it comes to taking prescription medications. Always follow medication directions carefully. Don’t
increase or decrease doses without talking with your doctor, and don’t stop taking medication on your own.
Keep in touch with your doctor, and let him or her know about any unusual side effects you may be
experiencing.
Remember, I’m not a doctor. I just sound like one.
Take good care of yourself and live the best life possible!