Today, one of the hottest political topics across the country is the impending “Medicaid work requirement.”

Reversing an action from 2012 by former President Barack Obama, the Centers for Medicare and Medicaid Services issued on a Jan 11 letter to state medicaid directors that provides new guidance for waivers that would impose work requirements as a condition of eligibility for Medicaid. The waivers to the work requirements were the result of a welfare reform law enacted by Congress in 1996 under President Bill Clinton.

Traditionally, efforts to improve health in the United States have looked to the health care system as the key driver of health outcomes. Despite annual health care expenditures projected to exceed $3 trillion, health outcomes in the United States continue to fall behind other developed countries. There is growing recognition that a broad range of social, economic and environmental factors shape individuals’ opportunities and barriers to engage in healthy behaviors.

Medicaid was implemented to provide health benefits for low income Americans, and benefits and eligibility are based on income, house size. Originally, in 1965, Medicaid categories were defined by welfare recipient status, but this began to change in the mid-1980s and ceased completely with the passage of welfare reform in the mid-1990s. Over its history, the Medicaid program has expanded to a program that provides health care services to around 40 million people at a cost of $170 billion dollars to federal and state governments. As we approach its 60th anniversary, Medicaid is the source of health care insurance for one in four American children and covers 40 percent of all births. Most recent reports show upwards of 70 million Americans are Medicaid recipients.

So, the question looms: is establishing a Medicaid Work Requirement an appropriate response?

Let’s put this in some perspective. According to the Kaiser Family Foundation, “6 in 10 Medicaid adults are already working. Among those who are not working, most report illness or disability, caregiving responsibilities, or going to school as reasons for not working. Many of these reasons would likely qualify as exemptions from work requirement policies. This would leave 7 percent of the population to whom work requirement policies could be directed, including those who report they are not working because they are looking for work and unable to find a job.

More work and fewer handouts for social welfare recipients — something many clearly see as being cruel and inhumane to the poor. But, others think they’re wrong. Especially when it is done responsibly, with dignity and meaningful purpose.

A 2009 study conducted by the Center for Research on Religion and Urban Civil Society at the University of Pennsylvania and by the Manhattan Institute found that the most effective approach to addressing the work requirement was though Public-private partnerships. This is when public and private sector resources are utilized to address a societal problem or complete a project.

I am fortunate to have contributed in a small way as a health educator, consulting for several organizations that provide healthcare to Medicaid recipients in states across the country.

One of those is AmeriHealth Caritas, headquartered in Philadelphia. They are among the Medicaid Managed Care Organizations that acknowledge that addressing social determinants of health is paramount for building healthy, self-sufficient communities and families.

Supporting Medicaid recipients with job opportunities through a Public-private partnership, AmeriHealth Caritas DC, under Karen Dale, market president, has invested in a program, Pathways to Work. The initiative brings support to DC residents by preparing them for work opportunities. AmeriHealth Caritas DC has already graduated the second class of Pathways to Work interns after 12 weeks of classes to address both office essentials and necessary life skills for gainful employment. Interns in the program are referred by Department of Employment Services, and received their training at the YWCA with their own personal mentor; then receive job placement support. 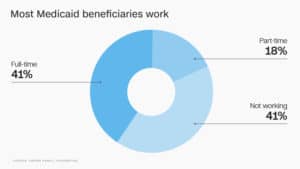 We should hope that this model is adopted by other Medicaid programs across the country. Given the success of such for-profit healthcare organizations in improving their members’ employment situations and in enabling them no longer to need welfare benefits, there is reason to believe that for-profit organizations should be given a greater role in working with welfare clients.

For the past 20 years, my work has focused on health advocacy and health education, primarily for poor and underserved communities. Central to this work has been addressing the social determinants of health. While housing and economic stability are important determinants, employment is strongly tied to health status and self-sufficiency.

This new Medicaid Work Requirement isn’t just economically responsible for the stewards of the public monies, it also restores the self-confidence of those on welfare. As the old saying goes, the best welfare program is a job. Being self-sufficient is key to living a fulfilling life.