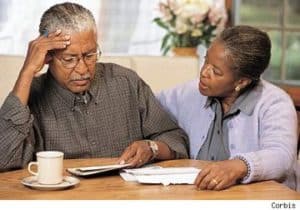 “as dementia slowly robs self-awareness, the person becomes less inhibited, losing both the memory of how he or she once behaved as well as a sense of social norms. It’s as if an internal filter on what’s polite behavior or not is turned off.”

Recently, social media was abuzz following a recent interview that legendary Quincy Jones did with a magazine. In the interview, Mr. Jones caused a stir with his “unfiltered” comments that many felt were (to put it mildly) outrageous and preposterous. The firestorm that has followed has led to a general consensus that, at 85 years old, Mr. Jones must have Dementia.

Without this columnist making any assertion about Mr. Jones’ cognitive state, the buzz around this national conversation presents an opportunity to write about an increasingly growing issue that is touching the lives of many of us with aging or elderly loved ones.

This is of even greater concern for African-Americans, who are two times more likely to develop late-onset Alzheimer’s disease than whites and less likely to have a diagnosis of their condition, resulting in less time for treatment and planning.

The term “dementia” simply means that a progressive neurological disease is present. There are many types of dementia. Alzheimer’s disease is the most common type. While the dementias may present with some common symptoms and may result in the same conclusion, how each of these diseases move through the brain can be different and requires caregivers to be informed in the unique type of dementia present.

Dementia is a collection of symptoms that can occur due to a variety of possible diseases. Dementia symptoms include impairments in thought, communication, and memory. 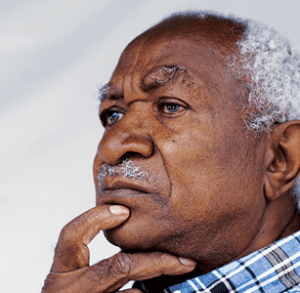 In addition to difficulty remembering, the person may also experience impairments in: language; communication; focus; and/or reasoning.

80% of individuals with a dementia will experience neuropsychiatric (behavioral and affective) symptoms. The many serious consequences of these complications are greater impairment in activities of daily living, more rapid cognitive decline, worse quality of life, earlier institutionalization and greater caregiver depression.

Researchers have known for a while that African Americans and Hispanics have higher rates of Alzheimer’s disease than whites do, though the reason(s) for this dementia disparity remained elusive. Now, for the first time, scientists have pinpointed a genetic mutation that may explain the higher risk for blacks.

According to the Alzheimer’s Association, older blacks in the United States are about twice as likely as older whites to have Alzheimer’s and other dementias; older Hispanics have about one-half times more risk.

Now, back to Quincy Jones. Once again, there is nothing that confirms that Mr. Jones has either Alzheimer’s or Dementia, yet, his comments ignited a national conversation around the issue.

In this type of dementia, there is no true memory loss in the early stages of the type that is seen in Alzheimer’s dementia. Instead, there are changes in personality, ability to concentrate, social skills, motivation and reasoning. Because of their nature, these symptoms are often confused with psychiatric disorders. There are gradual changes in one’s customary ways of behaving and responding emotionally to others. Memory, language and visual perception are usually not impaired for the first two years, yet as the disease progresses and spreads to other areas of the brain, they too may become affected.

Frontotemporal dementia affects the part of the brain that regulates comportment, insight and reasoning. “Comportment” is a term that refers to social behavior, insight, and “appropriateness” in different social contexts.    Normal comportment involves having insight and the ability to recognize what behavior is appropriate in a particular social situation and to adapt one’s behavior to the situation. For example, a funeral is a solemn event requiring certain types of behavior and decorum., yet not the place to laugh out loud. Similarly, while it may be perfectly natural and acceptable to take one’s shoes and socks off at home, it is probably not the thing to do while in a restaurant. Comportment also refers to the style and content of a person’s language. Like, it’s natural for most us to keep true feelings about disliking a person to ourselves, but not to say it publicly during a toast to the bride and groom at a wedding!

Loss of inhibition is not uncommon in people living with dementia. But, what should you do if you notice this behavior in a loved one? 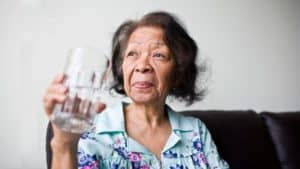 Notice what else is going on when a behavior occurs; something about the environment may be triggering a reaction in the form of this inappropriate behavior. Pay attention to the noise level, who’s present, the time of day, whether the person has eaten or used the bathroom.

In spite of how the behavior can upset you, they need you more than ever…