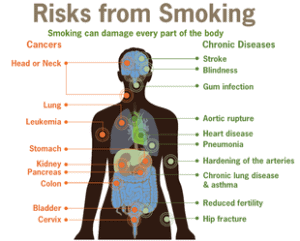 Are you wondering why you’re still smoking cigarettes? Unless you enjoy the taste of more than 7,000 harmful chemicals entering your body with each puff. And of those 7,000 chemicals, 69 of them are known to be cancer-causing (carcinogenic).

But let’s be honest, you probably already knew that after being exposed to No Smoking ads everywhere you look. So I’ll save the lecture and show you exactly how your body begins to repair itself beginning as short as 20 minutes after you quit.

While most people equate smoking deaths to cancer and lung disease, in fact many more people will die from circulatory conditions from smoking than die from cancer or other lung diseases.  Also, in general, they will die at much younger ages from these problems.  We would have many more lung cancers than we do if smokers could live long enough to get them.  When many people with fatal heart attacks or strokes are autopsied, there are often precancerous lesions found that indicate that if these people had a few more years to live they would have eventually succumbed to these smoking induced diseases.

Two chemicals in cigarettes stand out as the biggest problems are nicotine and carbon monoxide. 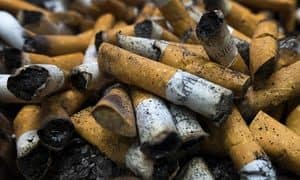 Nicotine, besides being addictive, has very powerful effects on arteries throughout the body.  Nicotine is a stimulant, speeding up the heart by about 20 beats per minute with every cigarette, it raises blood pressure, is a vasoconstrictor – which means it makes arteries all over the body become smaller making it harder for the heart to pump through the constricted arteries – and it causes the body to release its stores of fat and cholesterol into the blood.

The heart has to work harder to overcome all of these effects.  To work harder the heart, like every other muscle in the body, needs extra amounts of oxygen for the additional workload.  The oxygen has to be transported through the blood.  But carbon monoxide from tobacco smoke literally poisons the oxygen carrying capacity of the blood.  So this results in the heart having to work harder to get more blood to itself to work harder, because it’s working harder. A vicious and deadly circle when it comes down to it.

Another major effect of smoking is that it causes the blood to thicken, or lose its’ viscosity.

Blood viscosity is a measure of how “thick” and “sticky” a person’s blood is. By determining the viscosity, doctors could tell how smoothly (or how sluggish) the blood flows through the blood vessels, the degree to which the heart must work, and even the quantity of oxygen that could be delivered to the tissues and organs.

In other words, if the blood is more viscous (thicker and sticky), the heart must work harder to move the blood around the body. The chance is also high for development atherosclerosis or the clogging of the arteries as well as formation of clots. A clot could travel through the blood vessels and sometimes gets lodged in the narrow part of the artery. This blockade could lead to various cardiovascular ailments—including heart attack and stroke—causing paralysis or even death.

If you’ve been a lifelong smoker, you might be thinking, “Why quit now when the damage is already done?” But even the oldest smokers can reap significant benefits from kicking the habit. 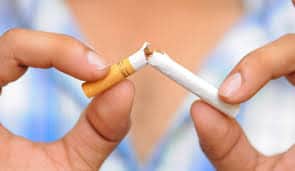 Beginning right around a month after being smoke free your lungs will begin to repair themselves. Specifically, the cilia, the tiny hair like fibers that push mucus out of the lungs begin to repair themselves to a level that they begin to function properly, will now be able to expel mucus, which will greatly reduce your chances of an infection.   Another noticeable improvement will be a decrease in shortness of breath and coughing, and it will continue to decrease dramatically the longer you’ve quit. If you consider yourself a heavy smoker (1-2 or more packs per day), no more than several months after quitting your withdrawal symptoms will completely eradicate.

With a year of no smoking under your belt, your risk of heart disease has been lowered by a staggering 50 percent compared to when you were still smoking. Look at it like this, whenever you see someone smoking you will know that they twice as likely as you to suffer from any type of heart disease.

With every cigarette, you are taking more and more time off your life. That’s less time you get to spend with your children, grandchildren, husband or wife. Your family likes you better when you are kicking and breathing, so don’t you think it’s time to put down that nasty habit?

On average, non-smokers live 14 years longer than smokers. If you’re still struggling to quit talk to your doctor about possible smoking cessation programs they recommend.